Gaming is great, but what’s really great is when you devise a plan to “hack” the game using nothing but the engine itself, No cheats, no actually hacking, just working out a genius plan.

How you play a game in the privacy of your own home, or the anonymity behind the monitor can say a lot about who you are and what you are like. Sometimes examples of gaming strategies reveal a utilitarian genius which is fascinating to me for two reasons: The ability to “win” the game in terms of exploiting an undesigned hack. And the reflection of the gamers psychology that the gaming strategy may be. Below are my favourite examples of strategy hacks in simulation games.

Conway’s Game of Life is an interesting concept. It is a game to show that complexity, and complex patterns can be created by very simple rules. In a sense, it tries describes natures ruleset at its most basic. The rules are:

The game then runs and essentially plays itself based on the initial pattern. Since it’s creation in 1970, many people have managed to define animations and specific patterns that can end up being quite amazing! People have achieved amazing feats, including creating: 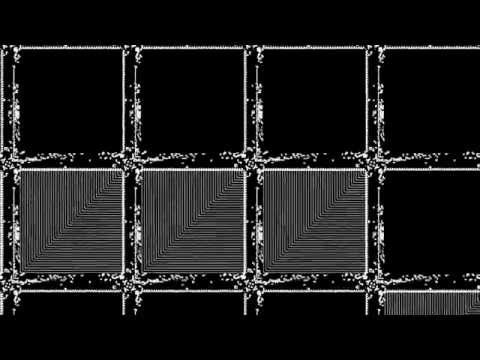 Just a walk in the park

This was one mans experiment to create the most horrendous experience for unwitting guests of his Rollercoaster Tycoon park. Usually theme parks are supposed to be a place to relax, have fun and maybe pump a little adrenaline. However this is not what happens in “RogueLeader23”‘s park. Guests who come here wander the maze for pretty much their entire life. It is however, a great way to see what the AI of these guests does in such a unusual situation. Do people get out, give up… or does the AI just push them through forever. Check out Eurogamers article on it: Inside the cruellest rollercoaster tycoon park ever created.

Magnasanti is Vincent Oscala’s epic SimCity 3000 city which uses the whole map at maximum efficiency. The largest and most terrifying SimCity is full to the brim with people, and just about runs in a stable condition. The happiness of its inhabitants however is at an all time low. Eduction and public services basically do not exist and the average lifespan is only around 50 years. There are definitely lessons to be learnt in population efficiency over wellbeing here…

Check out the video of it here

The Sims may be the best life simulation game ever made, and all those who have played it at some point have done something horrible in it. I for one, would have a strategy at the start of a new house and family each time I played at the young age of 13. Before I created the characters I intended to play, I would create a large family. I spend no time on their appearance and characteristics, so I could move them in quickly to the plot my real protagonists would get. Then I build no house for them, but a small room, just big enough for them all to enter. Once in, the door gets deleted and I fill the room with cheap furniture. Finally a mysterious firework appears in the center. One unfortunate family member then wanders up to it, and under the will of my 13 year old Godly power, they are obliged to set it off.

The family of course all burn to death. In each members place, a tombstone. I have achieved my goal: to have a cemetary on my building plot. What a curious bit of history for my protagonists to ponder as they build their dream house.

The way I played the game lead me to find anothers excellent starting idea: The Painting Goblin. Posted by a “Megann x” in Tumblr, it is good to know others are as weird and sadastic as I was playing this game.