From 2017 to 2020, I had a physical shop, the idea was to convert it from a boring PC repair shop into a social space where programmers could meet to work on projects. This was a post made part way through that development. For the last pics before I closed, go to the end

We are half way through a refurbishment in store. So far, the first half has been very successful I would say, both in it’s own aesthetic, and how it reflects the computer enthusiasm nature of the space. How do we go about designing for this type of space? Especially if we are on a budget and thus have a view to refurbish the store as organically as possible.

First, we need to create a checklist of the functional properties of the space. Form follows function, as we are taught every day in architecture school.

When looking at the old shop, I can find what I did not like about it: The colour scheme and style seems to have been mostly based around an imitation of a PC World-esque style. Or maybe even it has been modelled around a early 2000s beige Windows PC. You know the type. The mixed material flooring made the room feel smaller, and the computer displays are possibly the least efficient design imaginable. In fact, these displays were only supposed to be temporary but ended up staying. They needed to go. In order to be the place for tech enthusiasts to meet, enjoy and retain the PC retail and services aspect we require the following:

I already had some ideas I wanted to incorporate into the atmosphere. The most important was to create calm and not have to worry too much about becoming “outdated”. The original walls were white and there were images of PC systems mounted on perspex boards. The PCs pictured were not current and not even the most attractive technology from the time! White walls were harsh on the eyes and contrasted strongly against the purple and black logo and branding.

The current trend for urban shops appears to be a dark gray (gentrified gray as I call it), and so it was a good starting point for the walls. I couldn’t make the room too dark as there was only one source of light, a large window facing west which only catches strong sunlight in the late afternoon, so I went for a lighter “slate gray”, which had a slight purple hue and so went with the original branding straight away.

The pictures of PCs were definitely going to be removed. As I wanted this space to be a place for general technology, I couldn’t focus on any one aspect. I did consider putting up programming related “artwork” but this again was too confined. I settled for actual art. Prints from the game Monument Valley, an Esher-esque puzzle game for iOS which features beautiful level designs and is just as much about the artwork as the gameplay. To have actual artwork framed and hung would create a much nicer atmosphere than to have products on the walls.

The furniture I knew would be made out of wood, so so far we had purple branding, gray walls, wood and art prints. The branding had to remain as I couldn’t afford to change it, but it would fit temporarily with the neutral gray and wood. It made sense to keep the floor and ceiling in that theme.

The ceiling is suspended and due to sound and fire restrictions I had to keep the ceiling tiles. They are one of the most horrible designs so we covered each one with a sheet of playwood, slotted between the ceiling face and the existing tiles which would sit above them. This meant we kept the sound and fire insulation but completely changed the aesthetic.

The floor then was decided to be gray. There would be three grays sides (the two walls and floor) and one wooden side (the ceiling) to this box room. The ends of the room are the glass window and the shelving wall which remained white as it was too much work to take the shop logo down. There are many options for a gray floor, I knew I was going to use vinyl as it is cheapest and easiest to lay. The decision was between a solid colour, like the walls, or a slate effect and the latter won the argument for two reasons: 1. it wouldn’t show up as much dirt as a smooth colour as there was a texture printed onto it. 2. I would have gone for a real slate floor if I had the money and this was the best compromise!

It was a no brainer for me that the furniture should be designed through the use of parametrics: a method of generating forms through defining parameters on the computer and having algorithms define the output. We needed to make four pieces of “furniture”:

There are many forms of algorithms and methods in parametrics, some more common and world-tested than others. I wanted to explore a few varieties for my own enjoyment and to show off the power of computational form finding.

The desk would be the first thing created as it was the most important to begin the new store purpose: a space to work. The idea was to use a type of design manufacture known as waffle grid. The idea being that by using a grid of straight lines (which lends itself to wooden boards), you can create curves and organic shapes. This results in a structure which would have been very hard to plan without the computer, but looks natural and beautiful. It also means you can get the components cut by CNC or even a jigsaw out of standard sheets of wood. I had settled on this method for the desk. The final piece had been through several design iterations, from creating basic massing models, to an initial draft. This draft was revised based on the specifications of available wooden sheets and the dimensions of the CNC router. A curve was added to the front to accentuate the freedom of form allowed by the waffle grid system. The curve was created using attractor points which pulled a force onto the original front face and could be edited by moving the points on the computer.

The parts were “nested” onto sheets to create as little waste as possible, cut and treated at the manufacturers before being transported, flat-packed to the store. It took only an hour to piece together. 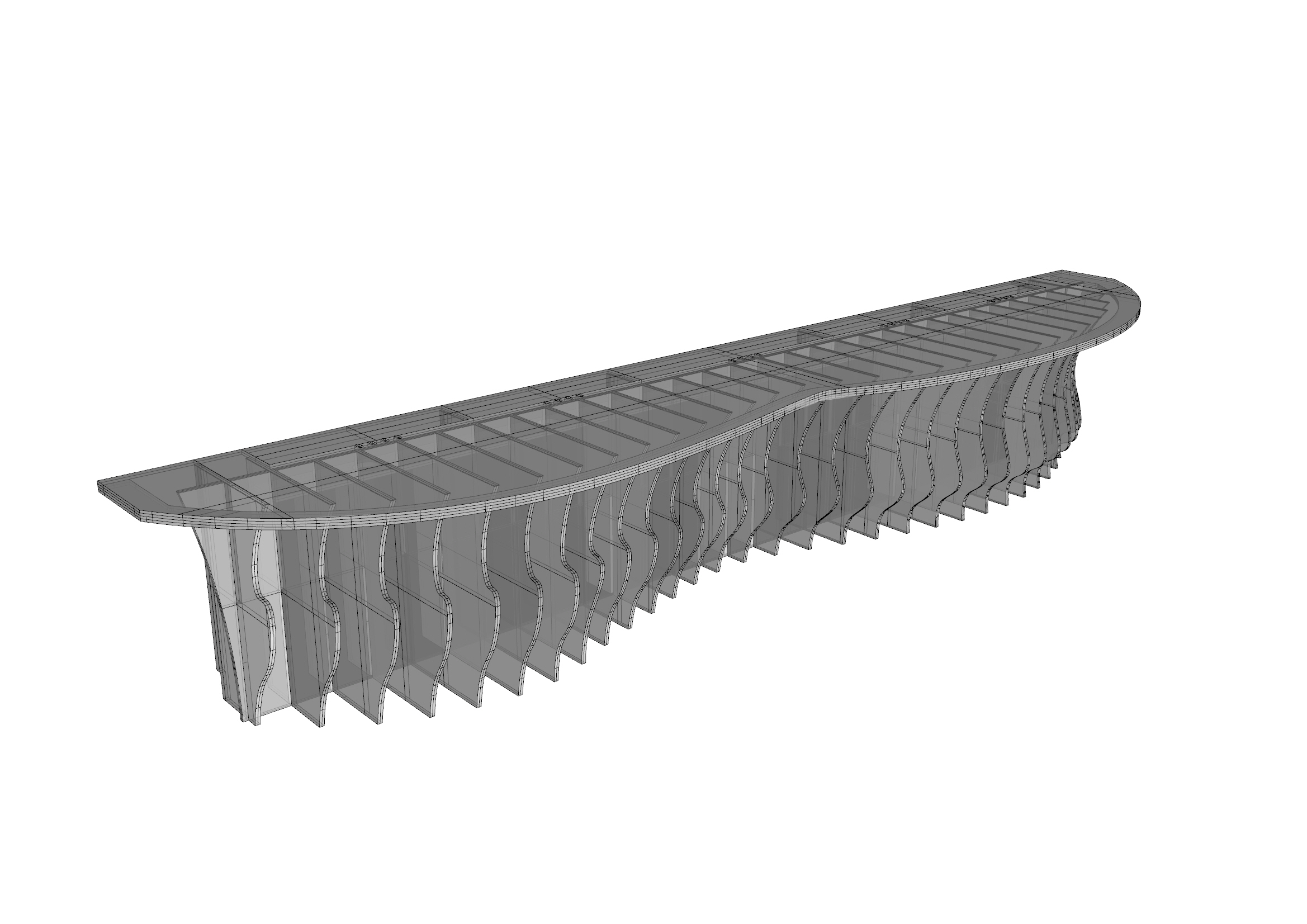 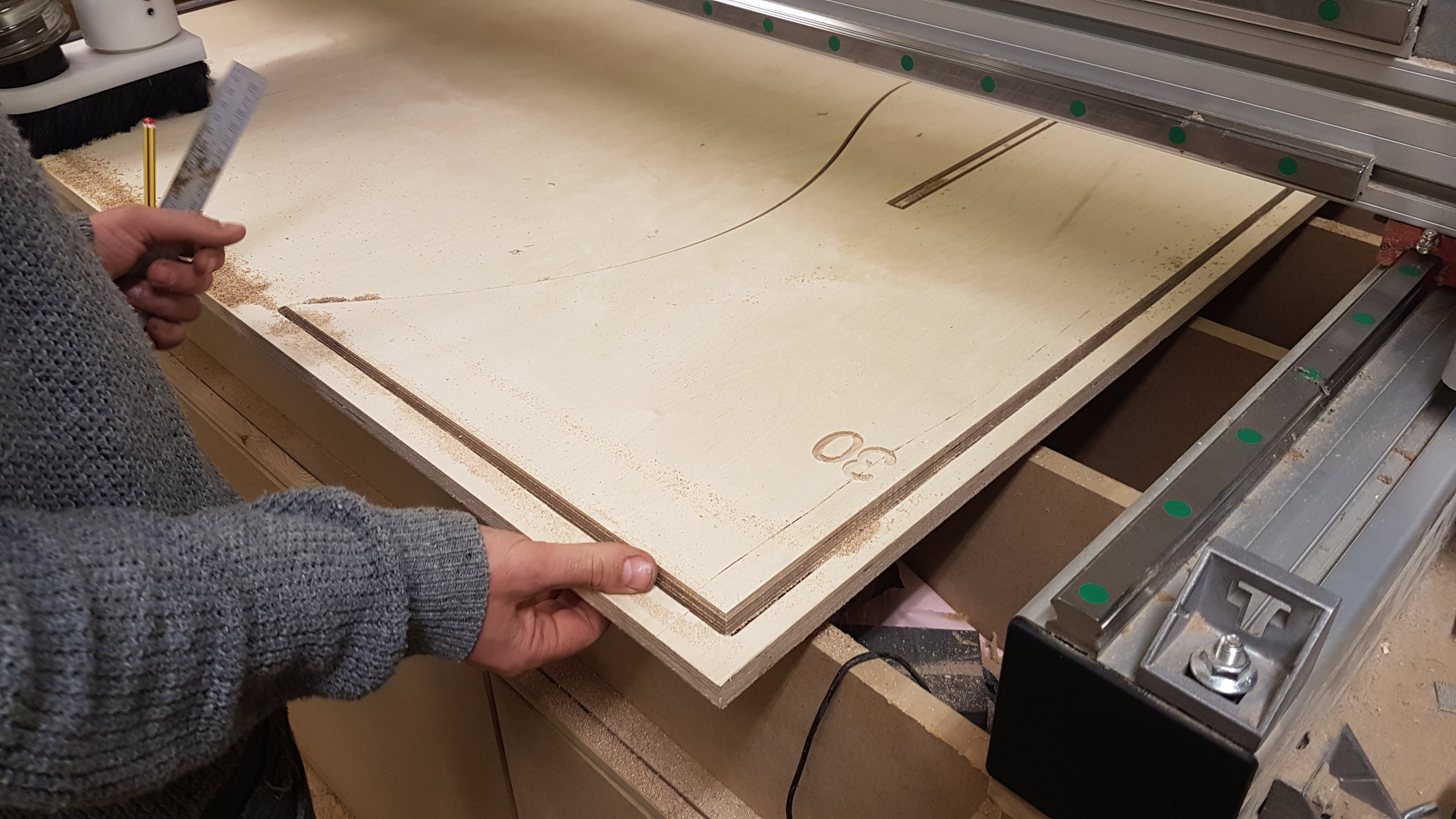 This is the shop as it stands now, floors, ceiling and wall treated, and desk installed. The rest of the furniture comes next and another blog post will follow. For now, here are some images of where we are at! 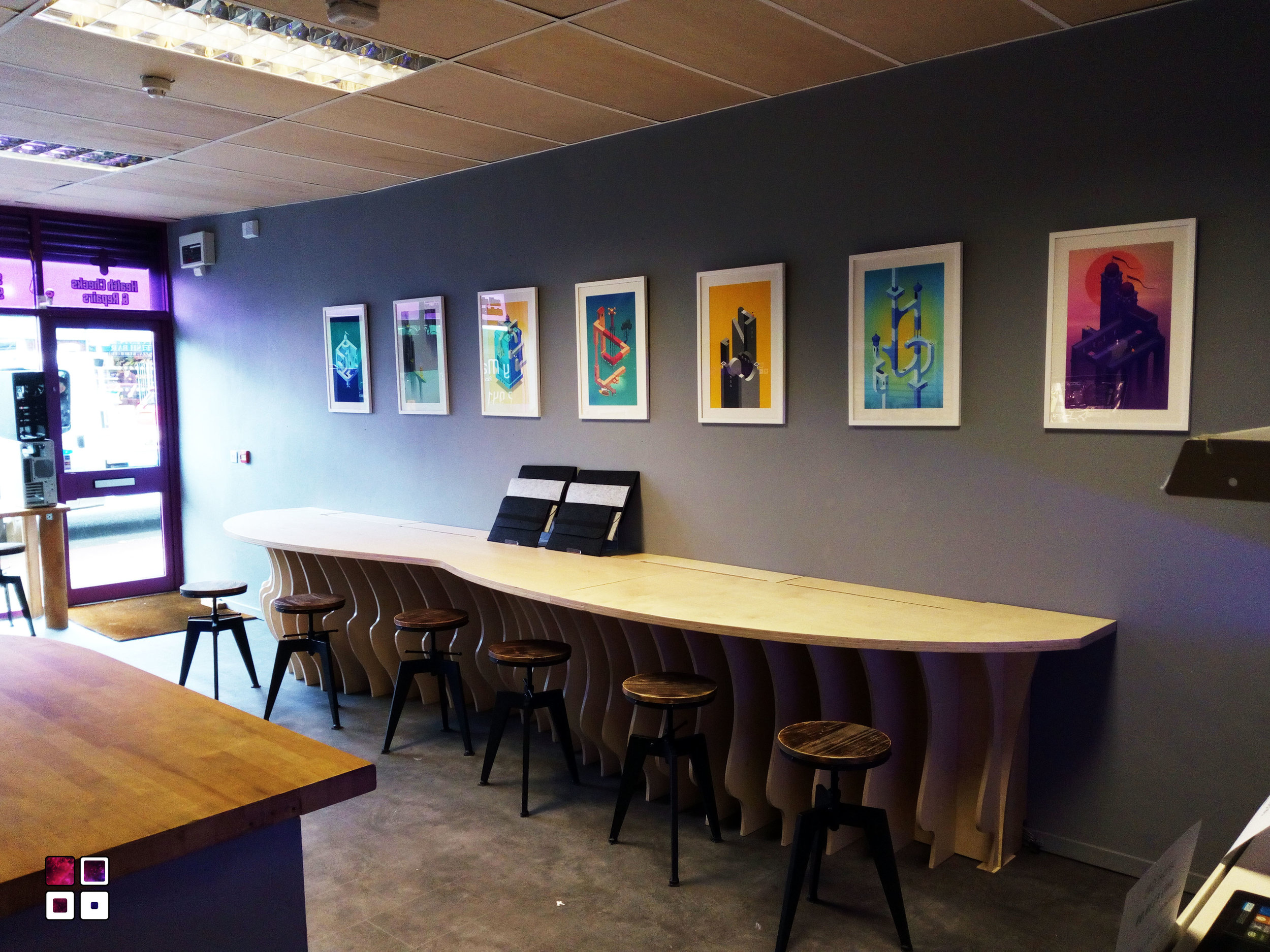 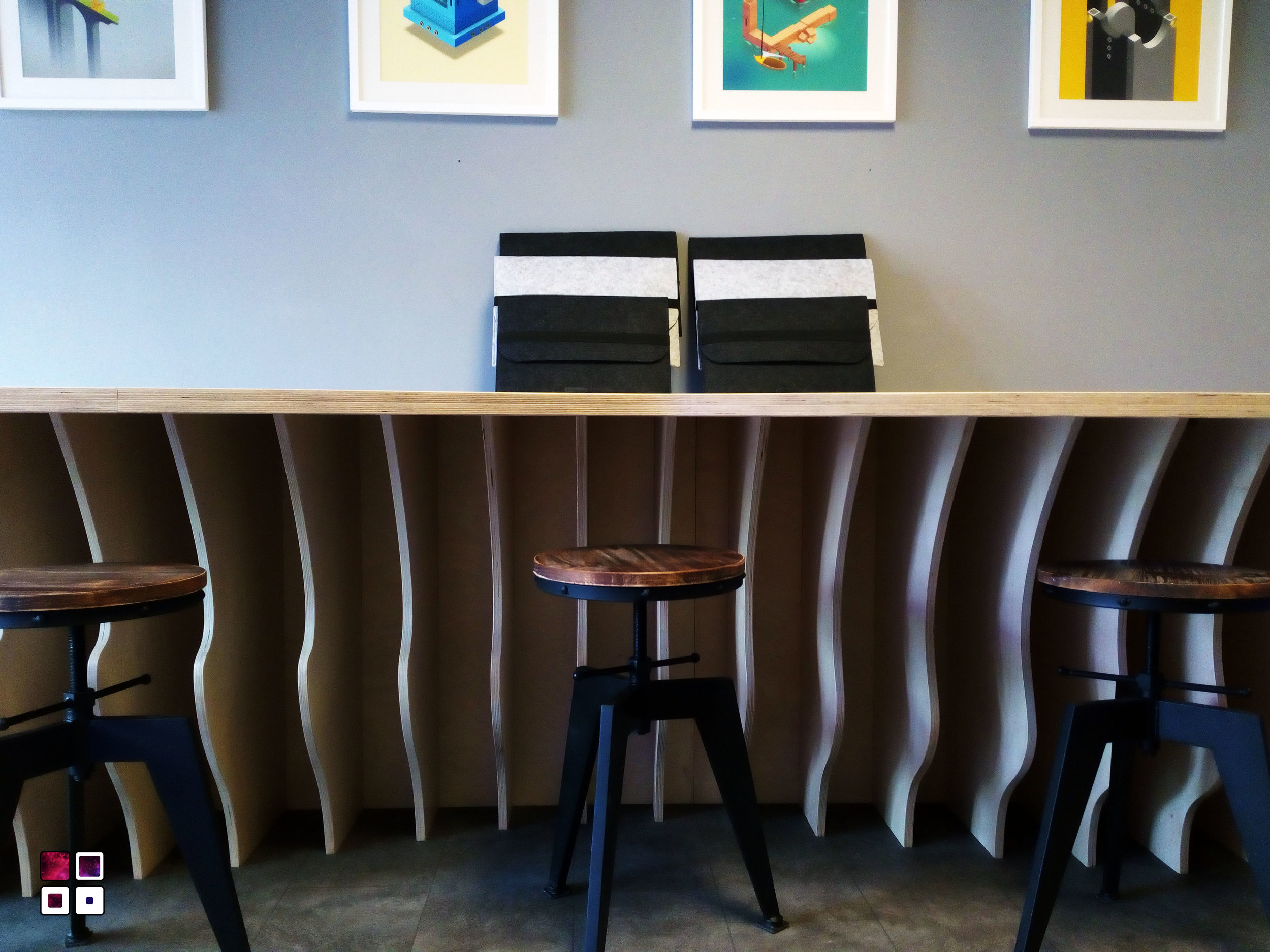 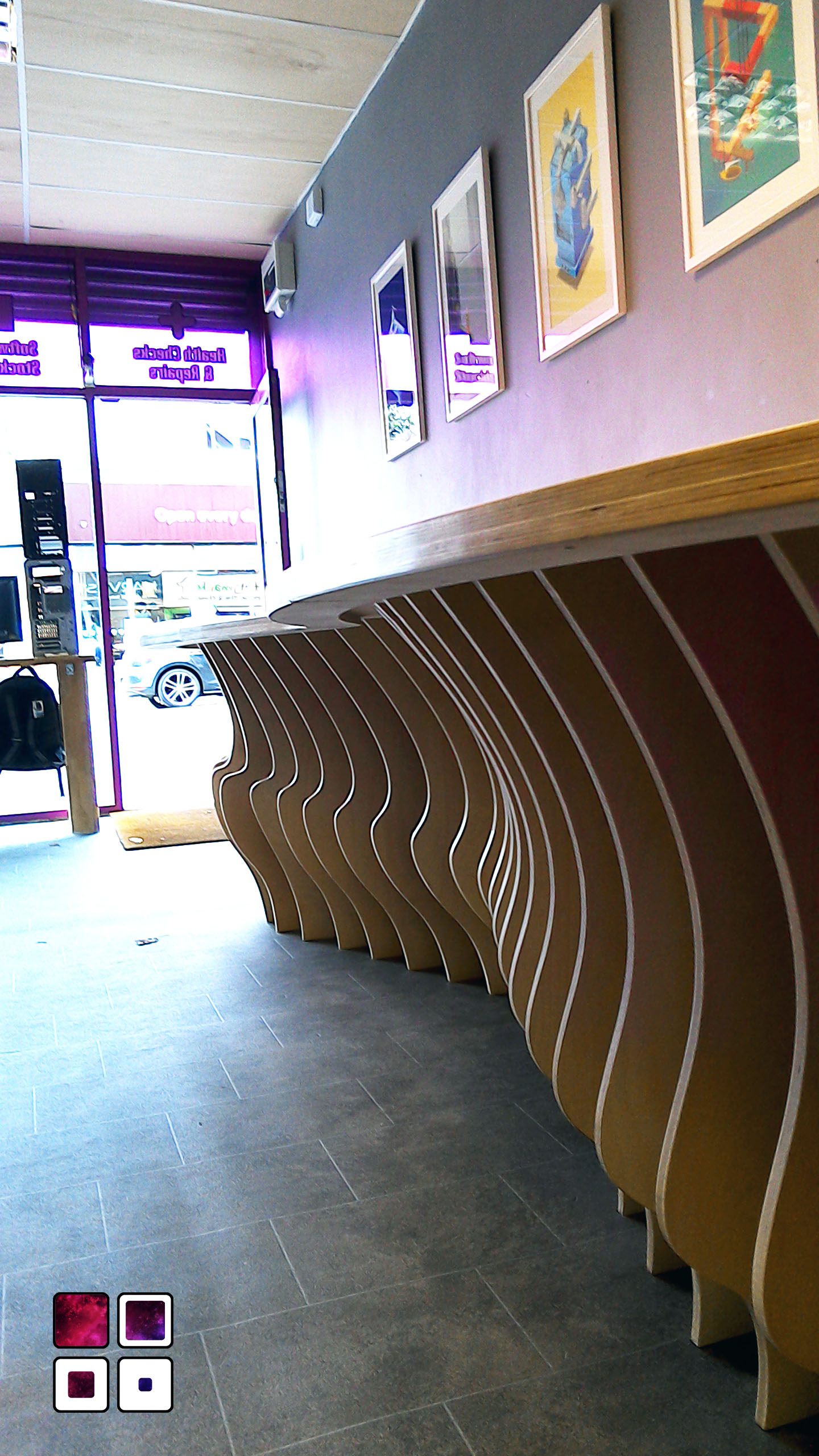 So, since this time, we have closed our retail shop to focus on more learning. The final form of the shop can be seen below. Sadly I did not get everything I wanted achieved, but for its part, the shop was a success. 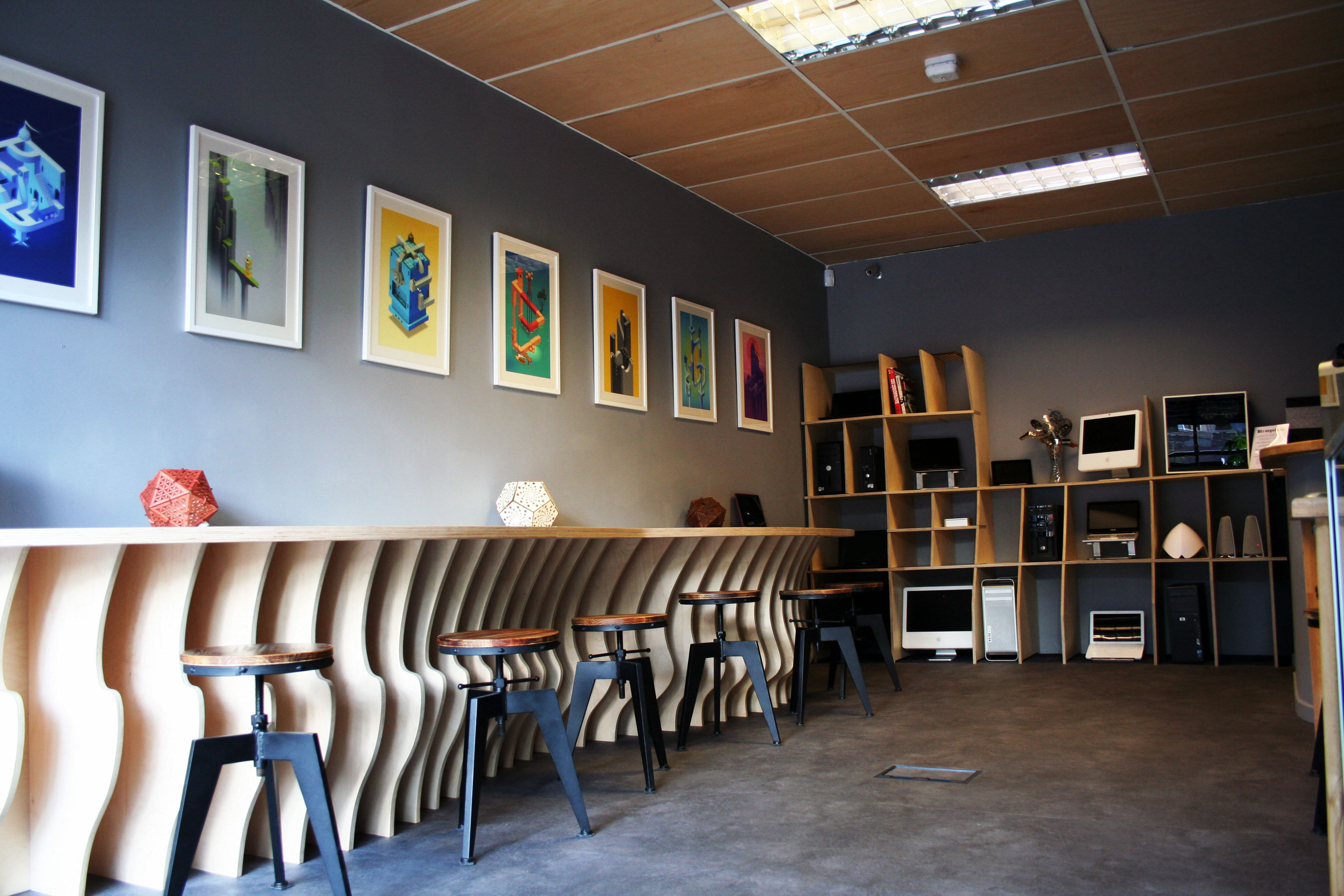 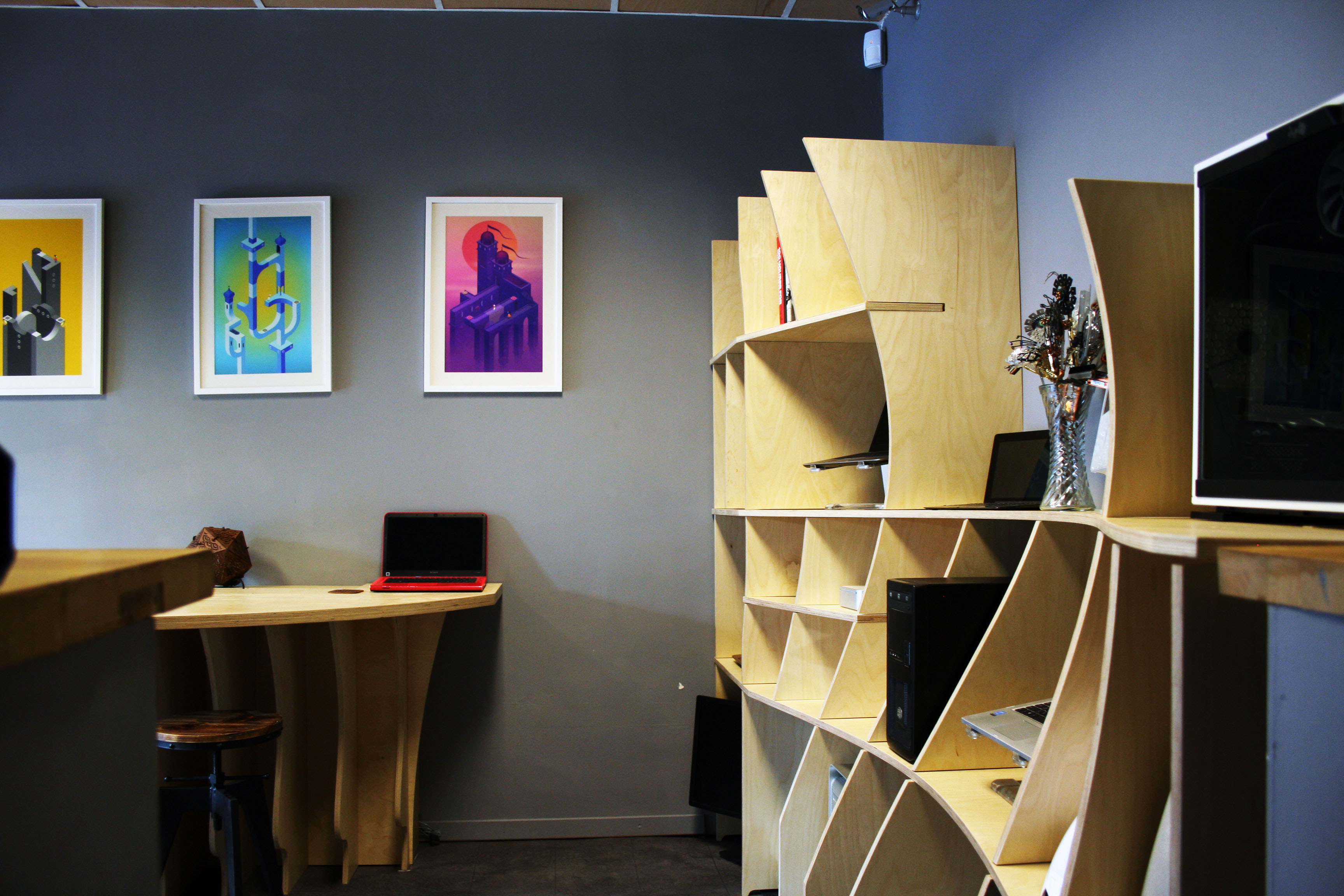